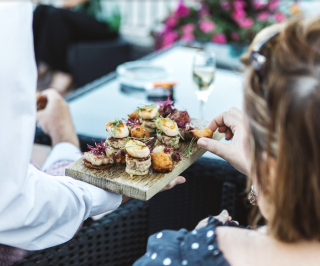 The Greenbank to launch new dining ‘feast’ experience: Chefs on the Quay

On 14th August, join The Greenbank Hotel for an inaugural Cornish collective, featuring six top local chefs rustling up their dishes against the panoramic backdrop of Falmouth harbour. A rustic feast night with a difference, Sharp’s Brewery will be sponsoring Chefs on the Quay and will match the six delicious dishes with their award-winning beers and ales.

The Greenbank Hotel are proud to be supporting Cornwall Air Ambulance’s New Heli Appeal and the Neonatal Intensive Care Unit at the Royal Cornwall Hospital in Truro, with all profits going to the two chosen charities.

What to expect:
Held in the events marquee on The Greenbank’s private quay, the evening will begin at 7pm. Enjoy the acoustic sounds of Mog Jones, who will combine her original songs with covers from the likes of Stevie Nicks, Bjork and David Bowie.

Then take your seat and tuck into the gourmet Cornish feast. Chefs include the likes of Arty Williams from The Cove, Simon George from The Alverton Hotel, Hylton Espey from Merchants Manor, The Greenbank Hotel’s very own Bobby Southworth, Tom Hannon from The Rising Sun and Executive Chef Nick Hodges from the Cornwall Hotel Collection who will be preparing a surprise dish.

Tickets include six dishes as well as paired tipples from Sharp’s, who will introduce a brew alongside each course. Limited tickets are priced at £55 and can be purchased via Eventbrite.

Mog Jones will then perform again before the event concludes at approximately 10.30pm. Expect a buzzing atmosphere, informal chatting with the featured chefs, and a truly impressive banquet highlighting Cornish produce.