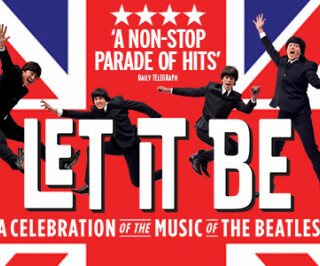 Let it Be at the Hall for Cornwall, Truro. Various times.

The International hit show that celebrates the music of The Beatles is coming Truro!

Direct from London's West End, LET IT BE has established itself as one of the West End's most popular shows when the production originally opened at the Prince of Wales Theatre in September 2012, before transferring for a year-long run at the Savoy Theatre from January 2013 – February 2014. The show has recently returned to the West End for an 8 month run at the Garrick Theatre.

Seen by over 1 million people worldwide, LET IT BE continues to delight audiences across the globe, having recently performed to audiences in Germany, Japan, Moscow, and France. LET IT BE showcases the music of the world's most successful rock 'n' roll band, in a spectacular concert charting the band's meteoric rise from their humble beginnings in Liverpool's Cavern Club, through the height of Beatlemania, to their later studio masterpieces.

The show is packed with over forty of The Beatles' greatest hits including: Twist and Shout, She Loves You and Drive My Car, as well as global mega-hits Yesterday, Hey Jude, Come Together and, of course, Let It Be. Travel back to the magical sixties when all you needed was love, and a little help from your friends!

The music defined a generation, captured the hearts and ideals of millions, and now you can relive it as LET IT BE comes to Truro.