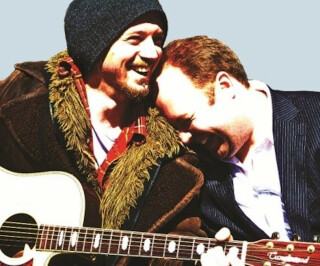 Jonny & The Baptists: The End is Nigh at The Poly

A musical comedy about family, friendship and environmental disaster.

Last year, Jonny accidentally told his four-year-old niece that climate change would end the world. To stop her crying, he and Paddy promised to fix it. They really tried very hard...

The new show from the UK's hottest musical comedians, THE END IS NIGH offers their most personal – and apocalyptic – venture to date. Featuring all the hallmarks of their success from barnstorming satirical rock to flights of brilliant silliness, the show blends comedy, theatre and rock gig in a captivating story of family, friendship and environmental disaster.

With ever-increasing live audiences from several hit tours and festivals, Jonny & the Baptists have been regulars on BBC Radio 4's The Now Show, topped the iTunes Comedy Chart with single 'Farage', supported Mark Thomas on tour and recently appeared on the BBC's Live at Television Centre.

'Superbly crafted... as witty as they are clever' Metro