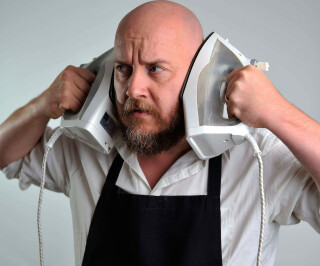 If you like food and cooking then you'll like this. A cocktail of stand-up comedy, striking innovation and extreme multi-tasking.

George Egg spends a lot of time staying in hotels and some years ago, unimpressed with room service, he took matters into his own hands.

Whilst performing a mind-bendingly original show of comedy-cum-illustrated-lecture George prepares a three-course meal on the equipment hotels unwittingly provide (iron, kettle, trouser press...), and if you want to, you can taste it at the end.

"a genius... he is the friendly face of anarchy, the anarchic face of food and the foodie face of comedy" SCOTLAND ON SUNDAY

"It's an hilarious show, with surprisingly good food. " THE TIMES

"It is refreshing to encounter a performer who really is unique. " THE TELEGRAPH

My find of the Fringe. THE INDEPENDENT