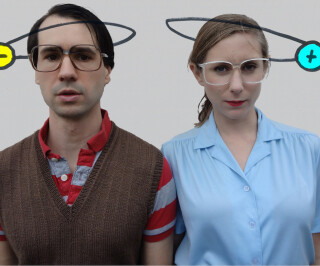 A quantum comedy about love in the subatomic world. The Poly, Falmouth. Time: 7.30pm.

An unexplained cat theft from a physics laboratory leads scientist Smithy on a journey through his own experiment into the subatomic world.

The situation becomes charged and it is impossible to stay neutral. Can he find the cat and win over his colleague Sarah in the process? Will the outcome be positive or negative?

As seen at the British Science Festival, a sci-fi adventure through the strange and wonderful world of quantum physics. Featuring physical comedy, scientific slapstick, and a search for Schrodinger's cat. Be prepared for a very silly show about a very intelligent subject.

The Last Baguette makes fast-paced, irreverent comedy theatre, and after performing in France, Switzerland and Canada, are now company in residence at the Pound, Corsham. What's the Matter? was written by Tiffany Woodsmith (winner of the Sunday Times playwriting award 2004, dramaturg for The Ingenious Gentleman Don Quixote of La Mancha – The Stage Award winner 2014), directed by Susana Alcantud, devised by the company.

"The gags roll one after another – the laugher is non-stop" Reg'Arts magazine, Paris, on Dracula

Made at the Pound, Corsham with support from Dr Helen Heath from the University of Bristol.