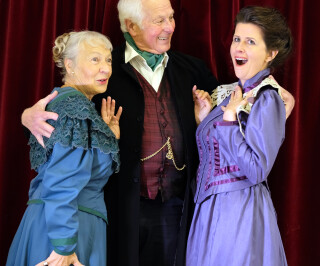 Following the successful production of La Traviata at the Minack theatre and in Falmouth last year, Duchy Opera will be touring 6 venues in Cornwall during early summer 2018 performing Otto Nicolai’s comic masterpiece The Merry Wives of Windsor.

This wonderful opera has delighted audiences since its premier in 1849. Its ebullient, infectious charm goes hand in hand with the playwright’s brilliant comedy. Based on Shakespeare’s familiar play, its larger-than- life central figure is the absurd Sir John Falstaff, roundly humiliated by the cunning wives of the title. When they each receive love letters from the impoverished nobleman, they decide to teach him a lesson tipping him into a river from a laundry basket. It abounds in lyrical melodies (which you will probably recognise) and in fairy magic not so far from A Midsummer Night’s Dream. The Merry Wives of Windsor is fully staged and performed in English with nine soloists and the Duchy Opera Chorus.

Music Director: Paul Drayton. Directed by: Angela Agutter Thomas. Catch it if you can!