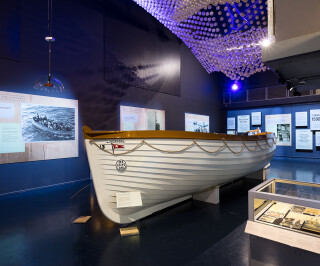 National Maritime Museum Cornwall’s current major exhibition, Titanic Stories, is coming to a close on
Sunday 5 January 2020 with only weeks left to see it before it ends.

Titanic Stories examines the Titanic’s momentous sinking on 15 April 1912, re-appraising many of the  myths, controversies and assumptions that still linger around one of the most well-known historic events of the 20th century. Working in collaboration with private collectors from overseas and national museums in the UK, the exhibition presents rare and never-seen-before objects, as well as retelling the personal stories of many of the survivors, victims and descendants of the Titanic disaster, including those from Cornwall.

There are a number of highlights from the exhibition including a thermos flask owned by a Cornish family on board the ship. The flask tells the story of human kindness and determination in the face of imminent danger.

Another highlight is the sculpture Heaving Lines created by local artist Dan Arnold. Suspended from the ceiling the sculpture’s shape takes inspiration from the iceberg that struck the Titanic. It is made up of 2208 monkey fist knots made from rope, which represent each person on board the ship. Each knot is handmade and has been created by local volunteers, community groups, Museum staff and visitors. Built by the Museum especially for the exhibition is the full sized replica of lifeboat 13. It was an ambitious project, using traditional boatbuilding methods and techniques, and took a team of specialists a year to plan and build.

Don’t miss two of Kate Winslet’s dresses which she wore in her role as Rose in James Cameron’s all-time successful blockbuster film Titanic, including the dress and large hat she famously first appears in as the film opens.

The exhibition, which opened in March 2018, has attracted well over 200,000 visitors. Richard Doughty, National Maritime Museum Cornwall’s Director, commented, “Titanic Stories has been a huge success for the Museum. We’ve brought objects to Cornwall that have never been seen here before, sharing Cornish stories and Cornwall’s tragic connections to the disaster”.

The Museum is hoping that there may be a life for the exhibition after it closes, Richard Doughty added, “we’re currently in talks to see if we can tour the exhibition overseas. A huge venture for us but one we’re very excited about”.

The next major exhibition to replace Titanic Stories will be announced soon.