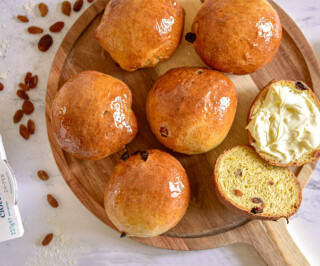 Saffron buns are a traditional Cornish teatime treat – a rich yeast bun not dissimilar to a teacake, only better, so we couldn't wait to share our latest Guest Recipe Blog with you from the team at Philleigh Way Cookery School...

Saffron is the world’s most expensive spice by weight, so how did it end up being a key ingredient in Cornish baking? Spices such as saffron were often landed in Cornwall, both legally and illegally, with records showing that it was once traded with the Phoenicians for tin and copper.

The county’s mild maritime climate also made it one of the few places in the UK where the crocus flowers that produce saffron could be grown commercially. It’s been a couple of centuries since saffron was produced commercially in Cornwall, however one farm is now growing it here on the Roseland Peninsula.

With such ready access to saffron, it was baked into revel buns on special occasions with so much being used that it gave the buns a characteristic yellow colour. For the past hundred years it’s been prohibitively expensive to use that much saffron, so many bakers used food colourings to turn their buns yellow.

See below for Rupert from Philleigh Way's instructions on how to make your very own...

If you’d like to get stuck into more traditional Cornish bakes and dishes, why not join the team at Philleigh for a Cornwall in a Day cookery course?