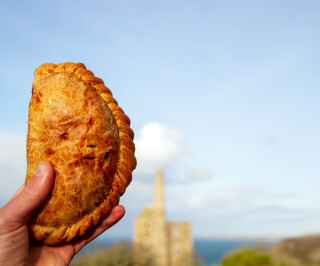 As a cookery school in Cornwall, Philliegh ways half-day Cornish pasty cookery courses (that run regularly throughout the year) are understandably popular. You can’t visit Cornwall and not eat a Cornish pasty, but it’s even better if you not only eat one that you made yourself but also take the recipe away with you to repeat at home forever more! Read on for Phillieghs guest blog on the history of the Cornsih pasty...

The Origins of the Pasty

Pasties date back as far as the 13th century, at which time they were a pie baked without a dish of French origins, with a rich filling of venison, veal, beef, lamb or seafood, gravy and fruit. The name pasty is a mutation of the Medieval French “paste”, for pie. One Royal charter from 1208 binding the town of Great Yarmouth in Norfolk to “send to the sheriffs of Norwich every year one hundred herrings, baked in twenty four pasties, which the sheriffs are to deliver to the lord of the manor of East Carlton who is then to convey them to the King [John].”

The History of the Cornish Pasty

It wasn’t until the 1700s when historic references to pasties across the rest of the country started to decline, and pasties began to become popular in Cornwall amongst working class families. These weren’t the rich, decadent pies of the previous centuries however; filling a simple short crust pastry case with potato, swede and onion, all common vegetables, and occasionally some cheap pieces of meat if available, was an affordable and easily transportable meal.
As mining boomed in Cornwall, pasties became a go-to meal for the miners’ crib break (a Cornish colloquialism for a mid-morning break): they were an all-in-one meal that could be taken down the mines, particularly if they were so deep that it was impractical for the miners to return to the surface during the day for a crib or lunch break. Sometimes fruit was cooked into one end of the pasty to provide a sweet treat at the end of their meal. Carrying a warm pasty in a small bag under their work clothes also helped to keep miners warm underground!

Not all miners carried their pasties with them, though. Some mines had stoves installed in them to cook pasties for the miners, whilst at other mines the pasties were cooked and the miners either returned to the surface for a break, or they were carried down to them. This is how the chant “Oggie, Oggie, Oggie!” “Oi! Oi! Oi!”, since appropriated by Australian sports fans (who shout “Aussie, Aussie, Aussie!”), originated. If pasties were being cooked at the surface by bal maidens (from the Cornish for mine, bal, and the English maiden), young women who worked at the mines, they would often shout the Cornish word for pasty, “hoggan”, three times down the mine shaft to notify the miners that their food was ready. In the depths of the mine, these shouts were heard as “oggy”, and the miners would chant “Oi! Oi! Oi!” back in acknowledgement.
Many people believe that the classic D shape and side-crimp of the Cornish pasty was so that the crust could be used as a handle by the miners. This makes sense, as mining was filthy work and there was a risk that miners hands could contaminate their meal with traces of arsenic (a by-product of processing tin and copper ore) or the explosives that they used. Others say that miners carried their pasties in muslin or paper bags so that they could eat from that and enjoy the entire pasty. Some say that miners’ wives carved their husbands’ initials into the end of the crust so that they could identify their food and also leave the very end for the “Knockers” – the mischievous underground pixies of Cornish folklore who needed bribing with food to stay on good behavior. 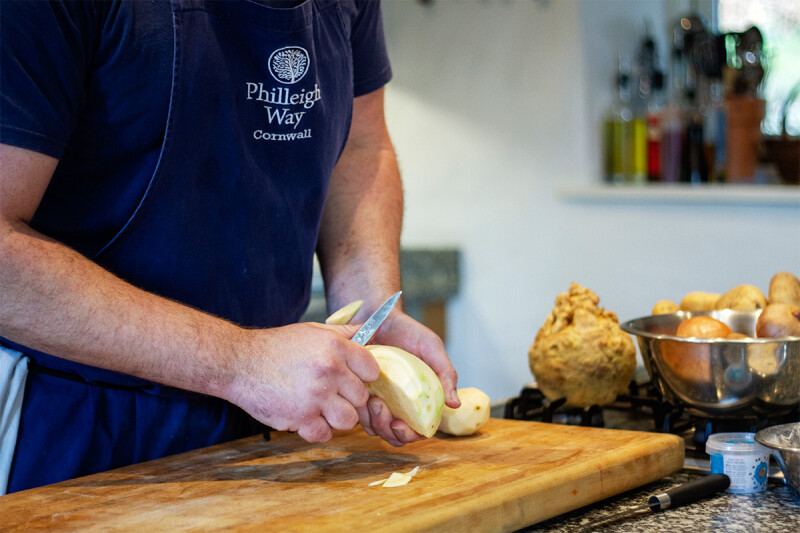 From Cornwall To The World

As the mining industry declined and eventually collapsed in Cornwall in the 19th century, many mining families emigrated to emerging mining areas around the world. The “Cousin Jacks and Cousin Jennies” as they were known, traveled to America, Canada, Australia, Argentina, Brazil and South Africa where there was demand for their mining expertise. They took their pasty recipes with them, and in many of these areas pasties (or variations of them) are still enjoyed.

What Makes An Official Cornish Pasty?

In 2011 the Cornish pasty was awarded Protected Geographical Indication (PGI) status in Europe, meaning that for a pasty to be sold as a Cornish pasty is must meet certain criteria: