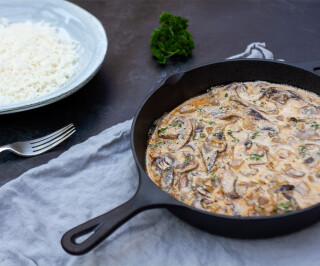 October is peak mushroom here in the UK. Whether you have the knowledge to forage (which is important, especially for hunting wild fungi as there are plenty of poisonous ones that look almost identical to edible varieties) or you get your mushrooms from the shops like most people do, at this time of year you should be able to get hands on some amazing mushrooms. Thanks to their firm texture and rich, earthy flavour they make an amazing substitute for meat in a lot of dishes – a favourite of mine being this mushroom stroganoff.

If you’ve got a vegan in your household then it’s really easy to turn this vegetarian dish vegan by using a vegan sour cream instead of the classic crème fraîche, or even to divide it into two pans right at the end before adding the crème fraîche and serve up both vegetarian and vegan options.