The Place Ferry has a special ‘place’ in Cornish history, providing residents and visitors on the Roseland Peninsula with an essential link between St Mawes and St Anthony’s.

Before the advent of mass car use the small ferry services that crossed the main creeks and estuaries were an essential means of getting people and produce to work or market.

Nowadays the ferry forms part of the South West coast path and is an essential link for walkers. 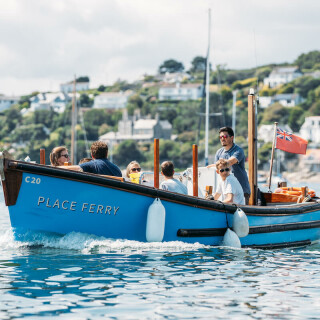 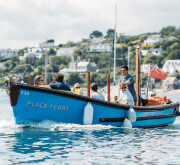 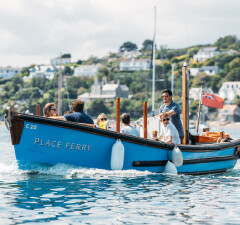 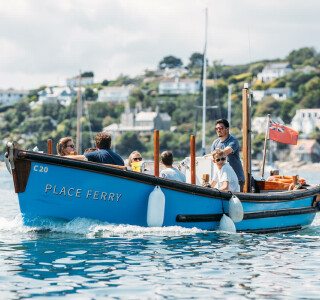 The 'new' Place Ferry is modern fibreglass Cygnus 20. She is fitted out for passenger operations with a large open deck and modern fuel efficient engine.

The Place Ferry was run for many years as part of the Percuil and St Mawes Ferry, getting estate workers to work and children to school. As road use increased the ferries reduced and eventually went into abeyance. With the advent of the South West Coastal Path the current service started with the support of the Countryside Agency in the 1980s.

As you approach Place House (built in 1861 by Sir Thomas Spry in the style of a French Chateau) on the Ferry it is not hard to see why this part of Cornwall has captured the imagination of authors and painters...not to mention the odd smuggler. If you get the time do visit the wonderful church behind Place House reached by the foot path at the rear of the house.

The Church, which is maintained by the Churches Conservation Trust is described as the best example in Cornwall of what a parish church was like during the 12th and 13th centuries. A holy well and Medieval stone coffin are located in the churchyard, the coffin having been discovered during the rebuilding of the chancel. Please leave a donation to the Church Conservation Trust if you can to help with the upkeep of this beautiful little church.

The area in front of Place House was the pond of a tide mill until the 1860s when it was infilled to create lawns for the newly built house. In existence by 1540, the mill was originally associated with the priory and would have been used to mill grain. The slipway and boathouse to the north of the foreshore were built to provide for the twice daily steamer service from Falmouth and also the rowing ferry to St Mawes.

Several of the Sprys were closely connected with the Royal Navy and the family also depended on fishing and boat building for it's wealth. It maintained it's own fishing fleet and owned a pilchard cellar based on Cellars beach. During World War II the house was requisitioned by the War Office and an anti-aircraft battery was placed to the South West to help protect Falmouth.

Buy tickets online and get 10% off

Pick up a Fal Mussel Card Visitor for unlimited travel

Connect to Falmouth on the St Mawes Ferry

Part of the Coast Path...